Predicting election results using Twitter & Facebook statistics is an intriguing idea, but possibly not too accurate. Politwitter trys to look at more than just the leader or party follower totals, but a range of criteria including growth rates and sentiment. Even before the election started the Liberals were ahead on Twitter & Facebook, not much has changed. The NDP growth rates have greatly increased the past 2 weeks but wont catch the Liberals in most measures. The so called "NDP surge" in traditional polls has potentially thrown these numbers out the window. So more than being a predictor of who will win the election, these numbers reflect who won the social media game.

It's also possible that tradional phone polling doesn't take the youth vote into account or those with mobile-phones. Social media might be scewed towards younger voters whereas the opposite for polls. 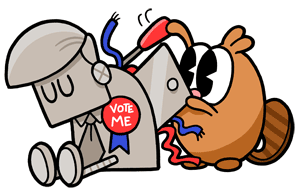